skip to main | skip to sidebar

This weekend I had the pleasure of piping in a small Irish-y pub in Lancaster. They were celebrating "Halfway to St. Patrick's Day!" and asked me to come down and provide some mood music. I happily agreed -- I've played there for "real" St. Pat's day for the past 3 years, and it's always been a ton of fun. The proprietors are great to work with, I've become halfway decent friends with DJ Celtic Flavor, who's always been there too (in fact, I'm piping for his wedding next week), and the patrons are very appreciative. Free beer, some tip money, and fun -- made for a great Saturday night!

I enjoy piping in a variety of settings, and over the years, I've had a lot of different types of gigs. Weddings and funerals are nice -- it's wonderful to be able to provide a service to a family that adds just a little extra "touch" to the event. Golf tournaments and parades are pretty cool, too, although I'm really just providing background music in those cases. School programs and church services I enjoy, because it gives me a chance to talk about piping and educate the people who are listening (and churches generally have GREAT acoustics). But I think that the gig I had this weekend is the best one I've done in a while, from a personal-satisfaction standpoint, for several reasons:

1) Wear what I want! It's a laid-back Irish party, so I went with my kilt, a t-shirt that said "Sham Rockin'" on it, and my combat boots. None of this formal tie-and-ghille-brogues stuff. Comfy!

2) Play what I want! As long as I was mixing in some old Irish standbys from time to time, I had free rein to play whatever came into my head. (Unlike funerals or weddings, where the family only wants 2-3 songs and tells me what they are.)

3) Play what the people want! I LOVE taking requests, and BOY did I have a lot on Saturday. I was playing Star Wars, Beethoven's Ode to Joy, Christmas carols, ABBA, and the Beatles. Someone even requested that I play MY favorite song, whatever that was. FUN!

4) True fans! There were several people who were visibly happy to hear me. I was recorded on iPhones, I had my picture taken, I was hugged and had my hand shaken, and I was accompanied by tabletop drumming and foot-stomping on several occasions.

5) New ideas! I was not able to honor all of the musical requests that came my way, but I wrote many of them down and promised to try to learn them by St. Patrick's day 2010, if the requestors could commit to coming back then. Seemed like a win-win. And now I get to research and arrange Pink Floyd, the Rolling Stones, Metallica, and AC/DC for pipes, as well as some tune called "Whiskey Before Breakfast." (I'll let you know how that turns out.)


All you pipers reading this -- I hope that you are able to line up gigs like this from time to time. Weddings and funerals can be our personal bread and butter, and parades keep the band's bills paid... but occasionally, try to line up a job where you can be the center of attention, and just cut loose and have fun. It'll help put some zing back in your brogues. :)

A Reflection on Weirdness

This past weekend I had the pleasure of being a guest interview-ee on The Lancast, a new biweekly podcast run by David Moulton and Daniel Klotz. They'll talk about anything they find interesting, but each episode ends up discussing, at least in part, some aspect of life in Lancaster, PA. (Hence the name of the show.) They are crazy guys, but fun to talk with, so to them: thanks again for the opportunity to appear on the show! I had a blast!

Here's the link to the episode. It's about 33 minutes long, so when you listen you might want to plan ahead.

We discussed a wide range of topics, including (in no particular order): bagpipes, my background as a piper, sci fi movies, and the "We Are Lancaster" movement, and Merry Christmas Orcs. Our lead-off topic was the idea of "people who play weird musical instruments" and whether they experience any kind of stigma, and has existing stigma against people who do weird things (like play bagpipes) been declining over the years?

I've been reflecting on this question for the past few days. I stand by my position (which I stated in the podcast) that "stigma" might be the wrong word -- just because something is NOT popular, doesn't make it UNpopular. There's a difference between people who are simply unfamiliar with something and people who have an active dislike for that thing. I have observed a growing popularity of Celtic music and bagpiping over the past few years, due in part to Braveheart and Riverdance and various "kilt rock" bands out there. Most people that I meet, when they learn I play the pipes, say something to the effect of "Wow! That's awesome! I LOVE the bagpipes!" and truly appear to mean it. And although they do exist, I think I can count on one hand the number of actual pipe-haters I have met in my life.

But that in turn got me wondering whether the people I encounter in my life are a representative sample of the population. I'm just not sure. I know I know more pipers than the average person does. I met many of my dear friends at schools that had pipe bands. My family and most other friends are creative people who tend to love music in most of its forms. And overall, I think I've surrounded myself in life with people who celebrate and embrace quirkiness, whether that means being afraid of Jell-O, or proclaiming oneself a Trekkie, or being able to recite scenes from Monty Python and the Holy Grail or The Family Guy or (like me) the entire Rabbit of Seville, or frequenting the Renn Faire, or welcoming the Jehovah's Witnesses in for Bible study that might just teach them a few things.

My point? If there is a "stigma" against bagpipes, I doubt I would see it because the people in my life wouldn't reveal that stigma to me. But maybe it's still out there. A quick YouTube search for "bad bagpipes" or "worst bagpipes in the world" comes back with a lot of results, and they're bad... but laughably so. I can easily list scenes in movies or on TV where hilarity ensues because the frat guy/Scottish guy/neighbor/Muppet got ahold of a set of bagpipes (and usually alcohol too). And then there's the list of self-deprecating jokes that circulate through the piping community (e.g., "Q: Why do pipers march when they play? A1: To get away from the sound. A2: It's harder to hit a moving target." "Q: How can you tell the difference between a set of bagpipes and a dead snake? A: When you see the dead snake in the middle of the road, there's evidence the driver tried to stop").

Is the instrument I love to play more commonly seen as the butt of jokes than I realize? I hope not... but I could be wrong. If it were true that the bagpipes are seen as a funny instrument, it could well be that the people who see the pipes that way have never seen them taken seriously or played with a high level of skill and musicality.

So I guess that's where I come in. To the greatest extent that I can, I want to show the general population that while the bagpipes are unusual and quirky, it IS possible to make breathtakingly beautiful, SERIOUS music on them. Contrary to popular belief, it IS possible to put them in tune and keep them there! And while the number of people in a given community that plays pipes is fairly small, it's probably a bigger and more dedicated group than most non-pipers realize.

To all pipers reading this: what's your opinion? Do you feel like bagpipes are viewed as quaint or humorous by the general public? Does the general public even care that much? Am I overthinking this question? I'm curious...

One of my favorite authors of all time is Stephen King. I have many of his novels at home, as well as some of his non-fiction books on the art of writing. In one of these, Danse Macabre (which he wrote in 1981 about the history of the horror genre), he's written a passage that has stuck with me since the moment I read it:

"I think that writers are made, not born or created out of dreams or childhood trauma -- that becoming a writer... is a direct result of conscious will. Of course there has to be some talent involved, but talent is a dreadfully cheap commodity, cheaper than table salt. What separates the talented individual from the successful one is a lot of hard work and study; a constant process of honing. Talent is a dull knife that will cut nothing unless it is wielded with great force -- a force so great that the knife is not really cutting at all but bludgeoning and breaking (and after two or three of these gargantuan swipes it may succeed in breaking itself...). Discipline and constant work are the whetstones upon which the dull knife of talent is honed until it becomes sharp enough, hopefully, to cut through even the toughest meat and gristle. No writer, painter, or actor -- no artist -- is ever handed a sharp knife (although a few people are handed almighty big ones; the name we give to the artist with the big knife is "genius"), and we hone with varying degrees of zeal and aptitude.

Now, this isn't a blog about writing, of course. But that doesn't make this illustration of Mr. King's any less relevant to me and my craft. I've encountered MANY pipers over the past 10 years, and unfortunately a lot of them rely solely on their talent (whatever amount they've been blessed with) to get them through rehearsals and performances. "Good enough" is good enough for them, and they rely on the very-true fact that the average person doesn't know enough about pipe music to tell if mistakes are made.

I've been one of those pipers too. Fairly recently, in fact. By chance I've been given perhaps a bigger talent knife than some others -- I have a keen musical ear, a solid internal metronome, "good fingers," according to some highly reputable teachers, and I can sightread circles around most other pipers. But when life gets in the way and time gets short, the honing of my talent is the first thing I stop doing. I can perform very well on the fly... but my development has plateaued. And it makes me feel a little funny to think that my students practice more than I do!

I recently heard it said that "the internet is the world's largest elephant, and it never forgets." So let me make this promise to the internet in general, and anyone who is reading this in particular: Today I will begin to re-hone my talent, to recommit to practicing, to sharpen my knife. The people who I teach and for whom I perform -- those who fork over money for what I do -- deserve better than hearing from a plateaued piper, even if she happens to be quite good. And I deserve to feel that I'm striving for my absolute best, rather than being "good enough." 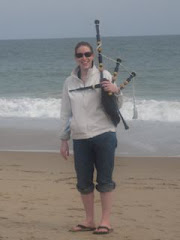 The Ogham Stones
Lancaster, PA
Born in the back room of a pub and raised in the basement of an abandoned armory, we are Lancaster's newest and greatest Celtic rock band...Slainte!